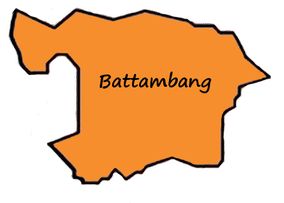 accommodation and meals in Battambang

you will not have any problem for you as well stay in a hotel in a guesthouse and you can eat very easily as well as in restaurants in markets where you will find no difficulty fruits and other good things to eat.

this city is a very popular destination for both the French colonial architecture, but also for the famous and mythical bamboo train, Buddhist shrines.
the province of Battambang is a destination where you can see many things and photo enthusiasts can look forward to make great photos of the landscape of the province of Battambang .
during your stay you can also go to Kam Pinh Puoy one of the largest dams built by hand during the Khmer Rouge , which now represents a lake 1900 m wide and 19 km long, or Cambodian like to spend their weekend with family .
the countryside abounds standby pagodas , ruins of Angkor era where you can stroll and enjoy the view
in the province of Battambang is also found Samlout area or located near 330km ² wet protect rainforest or cohabiting tigers, elephants , bears , leopards , epic pigs and many other protected species