the Angkor Wat Temple in Cambodia is not only a historical symbol , but especially the masterpiece of Cambodia .

the history of Angkor Wat Temple in Cambodia

built in the middle of the twelfth century by King Suryavarman II as a Hindu temple dedicated to Vishnu and it was built on a total area of ​​1500 meters and 1300 meters surrounded with huge moat of water 200 feet wide .
Angkor Wat Temple was built as a temple mountain represented My Meru , home of the gods in Hindu mythology .
the Bas-reliefs (carvings) located in the first gallery of the temples depict Hindu epics like the ” churning of the ocean of milk ” a legend that claims that Hindu gods are going to take the immortal life .
there are also reliefs of Apsaras with dancers between the pillars and the ceiling is decorated with lotus rose windows .

after the first gallery that forms the enclosure of Angkor Wat temple , a driveway gives access through the park in the second gallery .
the travels of the aisle decorated naga 350m long , first two libraries that we really do not know the value at the time and two small pools are encountered .

the inside walls of the gallery which forms the second chamber are decorated with bas-relief (carvings) along the entire length of the gallery with a tower at each corner .

the third gallery that forms the walls of 150 meters by 200 meters, is divided into three

levels to the central sanctuary where the tower has a height of 213 meters .
each of the different terraces are connected by outside stairs and are surrounded by a gallery .

the combination of the four corner towers of the central sanctuary with central tower that gives the well-known mythical kingdom of Angkor Wat also represented on the Cambodian national flag silhouette .
Angkor Wat Temple in Cambodia is classified with the world heritage of ” UNESCO ” since 1992 .
Angkor Wat Cambodia is a religious symbol , but also the largest tourist attraction in Cambodia .
Angkor Wat Temple is the student through three rectangular terraces to the central sanctuary , a tower with a height of 213 meters (669 feet) , with a moat 200 meters form an outline of more than 5 kilometers of powered temple the Siem Reap River water .
This temple is a combination of characteristic points of Khmer architecture ,
the hierarchical pyramid effect is achieved by using three platforms one above the other , which become progressively smaller .
harmony, balance and symmetry that emerge from the facade in front of you is the essential feature of the temple . 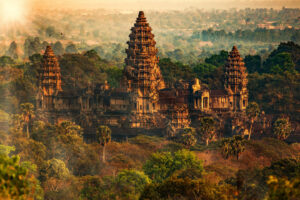 the first level , you can find the Gallery of Thousand Buddhas but most of them were destroyed or stolen .
the second level is surrounded by towers on the corners. found on the inner wall thousand graceful Apsaras , all different .
The third level was reserved for the king and the high priest . You can climb (carefully) in the towers .
The upper platform is square. It supports five towers that have become the most prominent feature of the temple .
another element present on all three levels of the temple is the sectional shape of many of its structures .
harmony , balance and symmetry that emerge from the facade in front of you is the essential feature of the temple .